We are all interconnected by 6 degrees of separation around the world said Hungarian author Frigyes Karinthy. With Social Media, these degrees are getting closer, as we can see the circles of relationships quicker and make connections in real time. With so many people online, we have to think, are we living online or offiline?
Facebook celebrated 8 years online this year. In 2005 Facebook was on every American student’s “must have” list and released globally to all those over age of 13 years old in September 2006. Today, it holds over 1 billion users on its database which 483 million of those log in daily to their accounts. Henry Blodget Columnist and blogger on investing, the Internet, and financial markets with US newspaper Huffington Post asked the question “Is Facebook a fad?” late 2009. People had thought it peaked in 2009 with 300 million users globally. Every year since then, the site grew with an additional 200 million users and in 2011 an influx of 250 million users signed up shows no slow down yet. I am asking the question in February 2012 “Is Facebook a fad?” What do you think? Simply answered in a single sentence my thoughts are that “Facebook will stay for quite some time, it changes constantly to prevent boredom and it’s inspiring other social innovations online”.

Has Facebook changed our lives in any way? Of course it has and we may not be aware of the effects on first thoughts. I can illustrate with a few scenarios. Friends have connected via Facebook and have rekindled friendship after separation of distance or time. When people are making plans for the weekend, they often ask their friends on the site what their plans are and update everyone with photos of their nights out afterwards so they can share the fun moments they had with others that could not make it. “Did you hear about …………………….. on Facebook?” is a common question Facebook users ask each other on the street. People find out so much on the social network that it makes up for the news missed the old fashion way called “talk”. Facebook finds lots of angles to get into our daily lives from photos of our friends shared online, games, videos of friends, organising events, shopping and much more. Most websites have that small blue “F” on it so you can inform your Facebook friends what website interests us.
There are lots of positives around how Facebook has helped us interactive with each other offline. People have developed better relationships with their friends and even people they may not have gotten to know in other situations. People would request friendships of people that they may just “know to see” and maybe start interacting with a few comments. Next thing, if they meet up in a shop, they will at least stop and say hello and maybe then continue conversation. Mark Zuckerburg homed in on the fact people are curious what others are always doing and Facebook has opened this up to everyone now. Local businesses have growth due to interaction they put in on Facebook to connect with customers and potential customers. Thus increasing employment in a potentially disaster recession period.

Parents and teachers would often ask me what I made out of Facebook and should their children be on it? These questions came from the dangers that surfaced from the first major social network called Bebo that catered especially to teenagers before its demise or near closure. Bebo’s height of user database was 40 million users reportedly by the company. Horror stories of mass suicide groups from around the world, UK and Ireland made parents sceptical of letting their loved children on the site. But the barrier between protecting and managing their children’s online activity was lost due to the lack of knowledge that most of us face when it comes to understanding social media properly at work it. Parent’s number one responsibility daily is to take care of the welfare of their loved children. It comes naturally when children step out of line that they are reprimanded on the spot, if they are sad they get a hug, if they fall parents pick them up, if they cry parents wipe the tears away with a hankie. This is how most of us grew up as a child parent relationship. But now with the pace of technological changes, it’s extremely difficult for parents who are not comfortable with internet and computers. These parents are left scared and worried and feel unable to support their children the best they can. One of two things may happen. Parents can do courses, get help from others, educate themselves and delve into the internet to try out social media or try and ignore it, and hope it’s just a phase that will be over soon. Unfortunately this is not a phase and will be increasing steadily. Children as young as 6 can get on Facebook (even though it’s against the terms and conditions of Facebook) and experiment. Children have no fear; they will try more things than any adult of dream of. Fear is only instilled into us when we grow conscience and have rules battered into us at school and home. The danger of no fear is that there is never a thought of a repercussion of their actions.
In the last 2 years, I have given seminars around schools in Donegal to parents who are worried about the dangers of Facebook and these have given parents some insights into what can actually occur online and also, how maybe they can prevent their loved ones becoming involved in a dangerous act. Children never realise what damage they can cause to another child online. Well know cyber bullied victim Phoebe Prince, originally from Co. Clare moved to the States and found that jealousy of her at the school turned from local bullying onto social network sites such as Facebook. Nowhere to escape lead Phoebe to take her own life in her home where she shared with her loving parents Even after her death people still attacked her on a Facebook memorial page. In Ireland we are seeing similar trends. 1 in 5 Irish children are being cyber bullied online today a study was carried out in Dublin last summer with teenagers. Shane Webber made his girlfriend’s life a misery close to suicide with his bullying and posting photos of her on websites nude and making reference to them on Facebook and tagged her parents and friends so they could see them.
A startling statistic research has found is that 1 in 5 children aged 10 to 17 have received a sexual solicitation over the Internet.

Seminars regarding information like this and how to prepare yourself as a parent, teacher or manager can group bookings by calling Niall Mulrine on 086-2377033 or email InternetSafety@pcclean.ie

Comments from parents and teachers after recent talks are:

“Lots of parents have no idea of what the children are doing online, especially the acronyms they are using for hiding messages from adults” – Belinda McArdle- Parent

“Niall’s presentation is informative, thought provoking and unapologetic in the clear message which it gives to Parents. I would highly recommend it to school authorities throughout the region.” Principal St. Marys NS, Stranorlar, Co. Donegal MR Fintan Keating

“Niall provided an engaging and eye-opening look inside the world of social networks for our staff and Parents Association. Highlighting the dangers and pitfalls associated with this online revolution helped prepare parents and teachers to protect both their own online presence and that of their children.” – Saint Eunans School teacher Pauric O’Donnell, Saint Eunan’s College, Letterkenny.

Your children’s online safety like any safety rests in your hands. 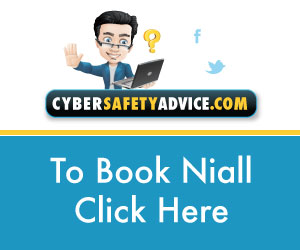